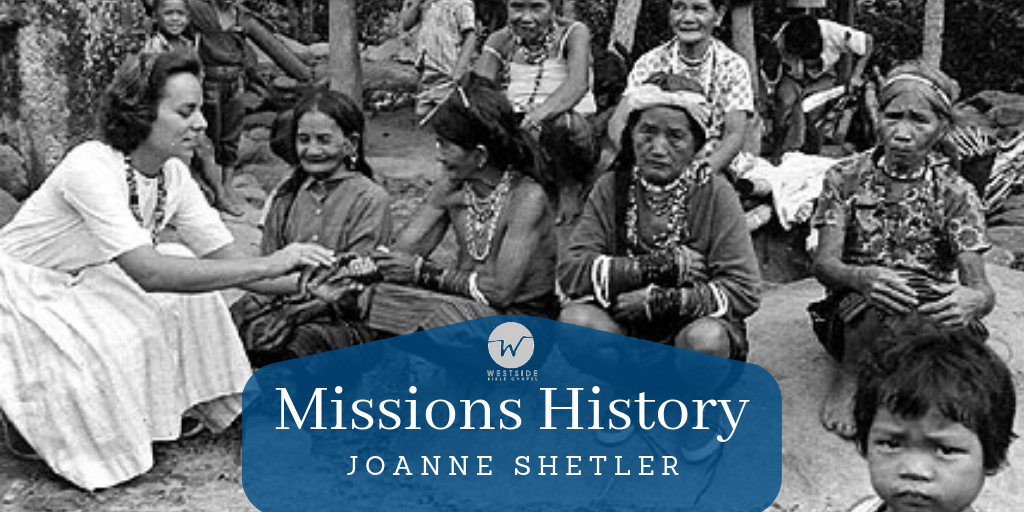 “I’ve never quite figured out how to bring God glory. But I have learned to surrender my dreams to Him. And he has made the reality of living according to His plan even better than my greatest dreams.”

With these words, missionary and Bible translator Joanne Shetler closed her book And the Word Came With Power (Wycliffe, 1992). With a fellow missionary, Joanne served among the Balangao people in the Philippines for over 20 years. She helped translate the New Testament into the people’s native tongue, persevered in the face of personal danger, and overcame evil spirits by God’s power.

Here is the story of modern-day missionary Joanne Shetler.

Early Life and Call to Missions

Growing up on a farm in rural America, Joanne Shelter never dreamed of serving as a missionary. Instead, she pictured herself living in the country, working as a nurse, and having a house full of happy people. At the tender age of 11, Joanne accepted Christ as her Saviour at a Bible club meeting. (Join us at our church in Sydney to learn how you can do this, too.)

One fateful weekend, Joanne dressed up in her Sunday best and went to church with her family. That day, a visiting missionary spoke to her congregation. He said that, “that 90 percent of the ‘goers’, ‘tellers,’ and ‘makers-of-disciples’ were concentrating on only 10 percent of the world’s population.” In contrast, only 10 percent of Christian workers were serving the other 90% of people—who had a far greater need.

Joanne felt a definite call to missions, but she wasn’t ready to give up her dream of a big farmhouse. She wrestled with God, but, at last, she surrendered her future to His will. She told the Lord that she was willing to go anywhere. And she began to pray that God would prepare a people group to hear the Gospel.

After completing high school, Joanne enrolled with a major in Bible at Biola University. She chose to take a linguistics class and soon became very interested in Bible translation. To develop her skills, she also studied at the Summer Institute of Linguistics. According to The Traveling Team, “She didn’t know what she had to give to any people group, but she knew that she could translate and watch to see what God’s word could do.”

Ministry in the Philippines

After graduating from Biola, God led Joanne to begin working with a partner, Anne Fetzer, in a remote area of the northern Philippines. They settled in an area called Balangao, where the people had asked for a linguistics expert to come and write down their language. In addition to linguistic work, the ladies would also translate the New Testament and provide medical help for the locals.

However, Joanne and Anne were in for a major culture shock. The people of Balangao were known as headhunters—and for good reason. Though killings had lessened, they still fought violent tribal wars where many were killed.

In addition, the mortality rate in childbirth was very high. The people were under serious oppression by evil spirits. In order to pacify the spirits, they had to make many sacrifices. If they did not do so, many of the newborns and mothers would die. With Joanne’s medical background, she was able to help many women in childbirth. She was also able to pray against the evil spirits for God’s protection.

One writer comments, “Joanne and Anne knew that the Lord had sent them to do more than just translate the Bible; He had sent them to proclaim freedom in Christ, real freedom. The Balangaos needed to be free of the evil spirits.”

Because of their ministry, the missionaries often encountered spiritual resistance and attack. However, they overcame the evil spirits by the power of God and prayer. With time, the people realized that the God of the missionaries was stronger than the evil spirits. They began to seek God, and Joanne’s Bible study grew from 60 people to over 200 people.

After 20 years of faithful labour and much assistance, Joanne was able to finish translating the New Testament into the people’s language. As a result, local churches were founded, and she had the joy of seeing a few thousand people come to Christ.

Next, Joanne and a team of local Balangaos began translating the Old Testament, too. By 2006, Bible-preaching churches had sprung up in every village in the Balangao Valley. The Bible was taught in public schools, youth camps, and Bible conferences. The Balangao people have begun outreach work in neighbouring regions, and have even sent out a few missionaries to other parts of Asia.

In her late 50s, Joanne returned to the States and enrolled at Biola for a Master’s degree in intercultural studies. After graduation, she began travelling to train church leaders and share her burden for unreached people groups. She received the Clyde Cook Missions Award from Biola University in 2016. Today, she is based in North Carolina and travels around the world for speaking engagements.

Joanne told Decision Magazine in 2006, “The Balangaos are just one example of how the power of God’s Word in a people’s heart language can change them forever. But many are still waiting. Bible translation organizations around the world are seeking workers so that people of every language, nation and tongue might know God….What role might God have for you in completing the task of bringing the Bible to Bible-less people?”

At our church in Sydney, we are so grateful to have God’s Word in our own language. Yet we know that many have never heard the Gospel in their own language.

For more information, send us a message on our Facebook page.