3 Key Obstacles to Your Faith 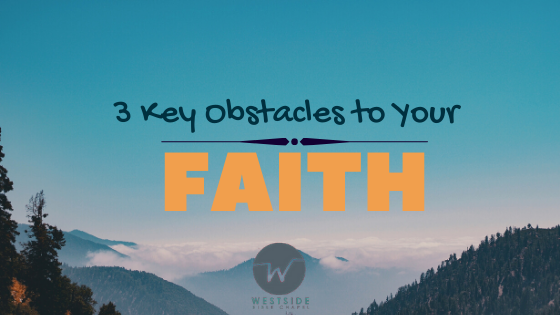 Faith in God is the greatest asset that we have as believers.  No wonder the book of Hebrews tells us that it is impossible to please God without faith.

But without faith it is impossible to please Him, for he who comes to God must believe that He is, and that He is a rewarder of those who diligently seek Him. (Hebrews 11:6)

As you take a journey through scripture — right from Genesis to Revelation — you discover that the fathers of old were able to accomplish great things through their faith in God.  In four different instances in scripture namely Habakkuk 2:4, Romans 1:17, Galatians 3:11, Hebrews 10:38) we are told that “the just shall live by faith”.

Doubt is a feeling of uncertainty or lack of conviction.  Each one of us from time-to-time experiences instances where we doubt God and what He has promised us, but God overcomes our doubts.

In Genesis 17, we see God promising Abraham that He would give him a son through Saran. Abraham laughs as a result of doubt.

Then Abraham fell on his face and laughed, and said in his heart, “Shall a child be born to a man who is one hundred years old? And shall Sarah, who is ninety years old, bear a child?” (Genesis 17:17)

When Sarah also hears that she will get a child she also laughs.

Therefore, Sarah laughed within herself, saying, “After I have grown old, shall I have pleasure, my lord being old also? (Genesis 18:12).

This story has a good ending because God is able to give them Isaac who was the child of promise.

Doubt comes about when we look at things logically or try to explain everything in the natural. We should take God at his word — whether it makes sense to us or not.

The second key obstacle that the enemy uses against our faith is fear. Fear can be described as an unpleasant emotion caused by the threat of danger, pain, or harm. The likelihood of something unwelcome happening or a feeling of anxiety concerning the outcome of something or the safety of someone.

Fear also happens to be the opposite of faith scripturally speaking.

Someone said that Fear is to the devil what Faith is to God. It is no wonder many times when God sent Angels to deliver messages to His people, He would start by saying “Fear Not ”.

A good example of fear becoming an obstacle is found in Matthew 14 where we see Peter being able to walk on water after seeing Jesus doing the same.

Vs 30 says that when he saw the boisterousness of the sea, he was afraid and immediately he began to sink.

The final obstacle we will look at is unbelief.  In 2 Kings 6, we see the story about a great famine in Samaria.

Later on in 2 Kings 7:1, Elisha comes and says, Thus says the Lord: ‘Tomorrow about this time a seah of fine flour shall be sold for a shekel, and two seahs of barley for a shekel, at the gate of Samaria.’”

In vs 2: an officer on whose hand the king leaned answered the man of God and said from unbelief, “Look, if the Lord would make windows in heaven, could this thing be?”

Elisha immediately answers him and tells him: “In fact, you shall see it with your eyes, but you shall not eat of it.”

The unbelief of this man cost him his life.  He was able to see it come to pass but did not eat of it according to the word of the Man of God, Elisha.

We need to be aware and consciously and deliberately guard against these 3 obstacles so that we can live by Faith as the word has told us we are expected to.

If you want to know more about Faith in God, talk to us through a contact form on our website Westside Bible Chapel or through our Facebook Page.